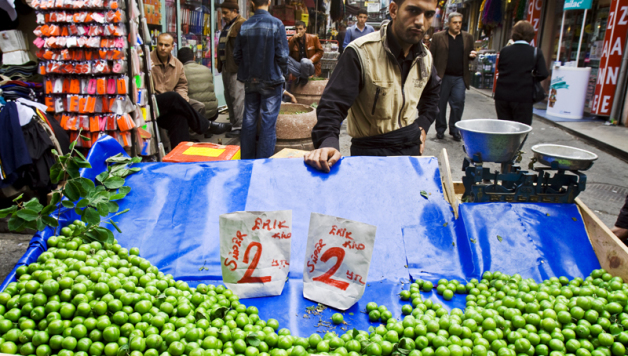 Whether you choose to cook, or you eat out, one thing is for sure, Turkish food is good with a capital G!

From the point of view of a foreigner living in Turkey, at first it’s quite a culture shock food-wise, because if you’re used to sauces and ready meals back home, you’ll find you have to cook everything from scratch if you don’t want to starve in this huge and beautiful country. Because of that, you soon find yourself hitting the supermarket and local markets to get your fresh produce, before walking back home, pondering what the hell you’re supposed to do with it.

Cooking from scratch when you’re not used to it is hard, but you soon get used to it, and the fresh flavours of the fruit and veg on offer will make it fun to learn, and delicious too.

The price of food and drink in Turkey is much lower when compared to the UK, but then I guess you have to realise that if you’re living there, the amount you will earn is lower too, so it’s comparable. For instance, a bottle of Coke is probably around the 1.5tl mark, which is in the 50p region – you can’t get a bottle of Coke in the UK for anything less than £1.50!

This is what I found food-wise within a very short space of time when I first moved to Turkey.

The markets are huge, noisy, and a little scary at first

Markets are massive, and you won’t be able to walk around freely because they’re so packed. It’s a good idea to visit without the intention to buy at first, so you can figure out what it is you want, and find out the Turkish word of it, just to clear up any confusion. Once you’re sorted, you’ll find that prices are low, especially compared to the large supermarkets, so for fresh produce, the market is certainly the place to go. Oh, and any Dirty Dancing fans out there, if you’ve ever dreamed of literally carrying a watermelon, the market is your place!

Supermarkets are literally the same

You’ll find various large supermarkets across the country, especially in large towns and cities, and where I was living, Marmaris, the main ones were called Migros, Tansas and Kipa. I later found that Kipa was actually Tesco, but with a different name! Supermarkets won’t make you feel like you’re away from home, because they’re very westernised, and like we mentioned before, fruit and veg here isn’t going to be as fresh as on the markets, but will always be more fresh than the produce you would get in a supermarket back home in the UK.

Small corner stores are quite expensive

You’ll find small market stores on most corners in resorts, but whilst they seem cheap for things like water and bread (and incidentally, the bread will always be more fresh than from supermarkets, so go to a small shop for it), the rest is quite expensive. If you’re buying juice or fizzy drinks, or even alcohol, I’d recommend the larger supermarkets for lower prices, and more choice.

The butchers might be confusing, but it’s always better

Old fashioned butchers aren’t really that commonplace anymore in the UK, but they’re still big business in Turkey. For fresh meat, this is the place to go, just like it used to be back in the day over here. Meat in supermarkets is okay, but it’s not the same as getting it fresh on the day. Problem being, most of the butchers won’t speak amazing English, so learn a little Turkish, get handy with hand signals, or make it all so much easier and take a friendly local with you.

So, to sum up …
Buy your bread from the corner store, as well as your water, buy your fruit and veg from the market, once you get your head around the size and noise, and go to the butchers for your meat. The rest? Head to the supermarket.