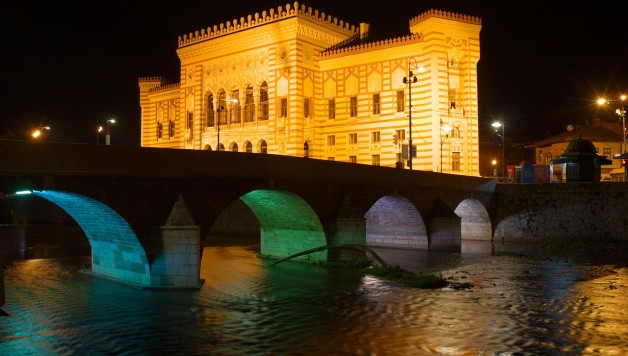 Bosnia-Herzegovina has been through a lot in recent decades and is most commonly associated with the war in the 1990s but it is rich in history, spanning all the way back to the Neolithic period, having had human settlement continuously since then. As a result, the cities are all awash with a myriad of cultural influences. Bosnia is a blend of Eastern and Western influences which both remain strong to this day. The remains of the Ottoman Empire give the country a fantastic array of architecture.

The second largest city in Bosnia is Banja Luka in the north-west. Situated amongst beautiful hills, the city lies on either side of the river Vrbas. It is full of cafes and bars which play host to a thriving social scene and offer the chance to sample the local dish of cevapi while soaking up the atmosphere. There is much to see and do in Banja Luka, with the old architecture such as Kastel, the monasteries and churches nestling amongst the modern features of the city. Shopping is a vibrant affair, with a range of clothes shops to meet all budgets, little caverns of tourist trade and bustling markets selling traditional handmade goods.

To the south, is the old city of Mostar, which was badly damaged by bombing during the war. It was famous for its old Ottoman-style bridge which has been carefully restored and is once again pride of place in the city. The area around the bridge is steeped in history and several hours can be whiled away wandering the streets taking in the views.

The capital, Sarajevo attracts a lot of tourists with its cosmopolitan feel. It is very tourist friendly and is considered to be one of the safest cities for tourists in this part of Europe, though as ever with travelling, it is recommended that single trip insurance is taken to cover your trip. Sarajevo has a thriving cafe culture which is a very relaxing way to soak up the multicultural atmosphere while watching the world go by. And in Sarajevo, it really does feel like the world with the mix of cultures that bring the city its unique ambience. There are lots of opportunities for sightseeing in this city. Bascarsija, the Old Town which centred around a marketplace and a famous fountain, the Sebilj is a focal point.

Jajce is a small city to the north west of Sarajevo and has the unique feature of having a waterfall in the centre. There are a number of other tourist attractions in Jajce, including and underground church, a fortress and a Franciscan monastery. The surrounding area is wonderfully picturesque and the journey to the city is as worthwhile as the visit there itself.

Bosnia is an up and coming tourist destination as the country repairs and recovers from the devastation caused during the war. The area has such a diverse history that what has survived is still spectacular and very much worth a visit.

This post was written in association with Bupa Travel Insurance.