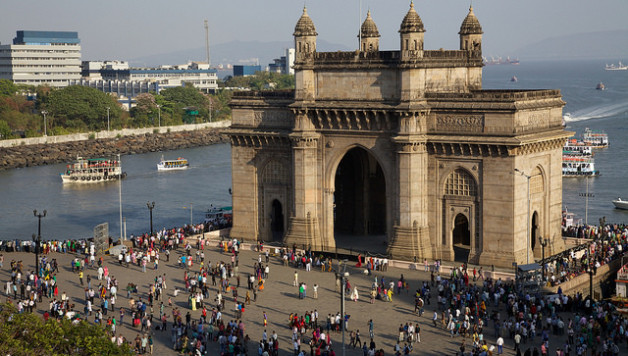 My Day in Mumbai, India.

India is one of those countries that has always both fascinated and scared me. The fact it has a population of over 1.2 billion people has probably got something to do with the latter. My best friend is of Indian heritage so, as well as visiting the Taj Mahal in Agra and the Golden Temple in Amritsar, I would love to explore more of the country of her ancestors.

But thus far I have only spent one day in India! A few years ago I passed through Mumbai (formerly Bombay) on a journey to New Zealand from Africa, when I had a 10 hour wait there between flights. I couldn’t bear the thought of spending all day sitting around in a transit lounge while this exciting mass of humanity lay just outside, beyond my reach. So before I left Nairobi I organized a transit visa for the day, and I was SO pleased I did. Mumbai lies on the edge of the Arabian Sea and I remember the taxi drive into the city took me along the waterfont which built up my anticipation and excitement.

So, what did I get up to during my day in Mumbai?

The first thing that struck me with awe was the Gateway to India. There is something quaintly romantic and nostalgic about this relic from India’s colonial past when it was part of the British Empire. The monument was built to commemorate the visit of King George V and Queen Mary in 1911. It was erected on the waterfront at Apollo Bunder where they disembarked and was completed in 1924. It’s a beautiful archway which has design features of both Hindu and Muslim architectural styles, and sits right on the harbour front, metaphorically opening it’s arms in welcome to visitors to India. I love it. 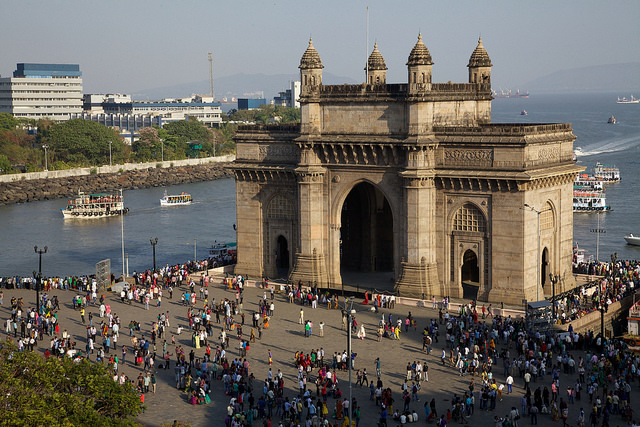 The Gateway of India.

A 15 minute walk south along the waterfront bought me to the Colaba Causeway Market which sells about everything you can think of, from souvenir trinkets to faux antiques, shoes to handbags. Although haggling doesn’t come naturally to me that’s the natural order of things in an Indian market so I tried my best. The important thing is to keep a smile on your face and not take it too seriously. The market is surrounded by restaurants and higher quality shops that items at a fixed price. I spent a couple of hours perusing the stalls and bought some clothes for a bargain price. Shopping in a bustling market is tiring and thirsty work so I did stop for a light refreshment at Cafe Mondegar. Along with Leopolds it is one of Mumbai’s most established and popular cafes.

Next to the Gateway to India is the 5 star Taj Mahal Palace Hotel, which is a stunning example of Indo-Saracenic/Indo-Gothic architecture and one of the most photographed buildings in the city. I could probably never afford to stay there but I wanted to experience a little luxury so I splurged out on “high tea” at the Sea Lounge before returning to the airport. I was a little under-dressed, not to mention hot and sticky from being in the market, but I think they get a lot of that. High tea runs from 3:30pm-7pm. If you can try and reserve a table with a sea view. As well as the more traditional sandwiches and cakes there is also exquisite indian finger food.

If I’d had more time I would have visited the Elephanta Caves, just a short boat trip away on Elephanta Island, within the Mumbai Harbour. The man-made caves have amazing sculptured walls dating back to the 5-6 centuries AD and are a UNESCO World Heritage site.

After my brief taste of Mumbai I am very keen to return to India to see more of this fascinating country.