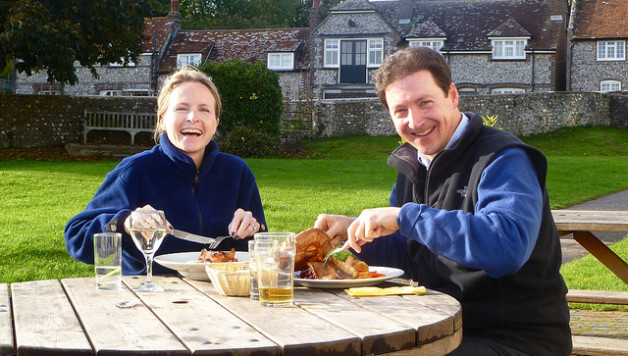 A special day – Sundays in Britain

Sundays are a big deal in Britain. Yes, it’s the “Lord’s Day”, but it goes much further than religion in some ways. Sunday is most people’s day off, so it is dealt with in a special, sacred way.

If you know anything about Brits, you’ll know we’re a bit eccentric, and so all this treating a day as a special kind of occasion is probably a little alien to you, maybe causing you to roll your eyes, but think of it this way, Sunday is the official day of rest, and resting is an important deal when you’ve been at work all day.

Church
We mentioned before that religion deems Sunday to be the Lord’s Day, so many people head to a church service of a Sunday morning, and you’ll often hear church bells ringing, especially in the smaller towns and villages. If you’re visiting or living in a rural area, this is even more likely.

Sunday roast
Roast beef and all the trimmings, Yorkshire pudding regardless of whether you’re anywhere near Yorkshire, roast potatoes, Brussel sprouts, cauliflower, Bisto gravy … and all with a huge pudding for afterwards. This is basically one of the biggest things in British culture, and it’s usually done around the table with family present. Full of stodge, and not particularly great for the waistline, none of this really matters, because it’s a staple of the British Sunday.

The pub
At some point during the day, be it before lunch, or after it, you will find bars and old-fashioned pubs packed out on Sundays. If the football is on, you can expect them to be even busier! It used to be that the old Working Men’s Clubs were full of the men having a pint or two, whilst the women were at home cooking the Sunday roast (see above), but obviously we’ve moved on from all that, and nowadays you’ll find couples and families alike enjoying a sociable hour or two, and for those that can’t be bothered to cook, carveries are the way forward, which is basically the Sunday roast but eaten out!

The walk
Whether it’s to walk off the plentiful carbs you’ve just consumed at lunch, or to get a lungful of fresh air, a country walk on a Sunday is a traditional thing to do, be it part of a couple, with friends, or a family outing.

The lie in
Obviously coming before all of the above, Sunday is the day to have a lie in, when your alarm is switched off, you don’t have a prescribed time to get up, and you can be as lazy as you like. Fancy breakfast in bed? It’s easily done on a Sunday, with the weekend newspaper, chilling the hell out!

Sunday is basically a break from the working week, unless you’re unlucky enough to work in a pub or bar, and it is always spent with loved ones, in whatever guise that may be. As far as important parts of British culture are concerned, Sundays are the best.